The wide, arching spread of the tree in front of the Saratoga Springs Post Office has always  delighted my eyes, particularly with the way that its curves echo the arches of the building’s architecture. I have photographed the pairing in several seasons and from various angles, and until today had not quite settled on which version to paint instead of photograph.  I particularly liked the angle from directly across the street, in which the lines of the crosswalk added a counterpoint to linear rhythms of the tree limbs.

Several months ago I finally saw the lighting that would bring out that relationship — the morning sun casting a curved shadow from the tree onto the building — and I knew I would be back to paint it. Finally today, inspired by the lightening of the color of the leaves at the top of the tree and the warm fall light,  I was inspired to spend four hours there (and another three in the studio) to capture the dynamic relationships in an 8×10 inch painting. 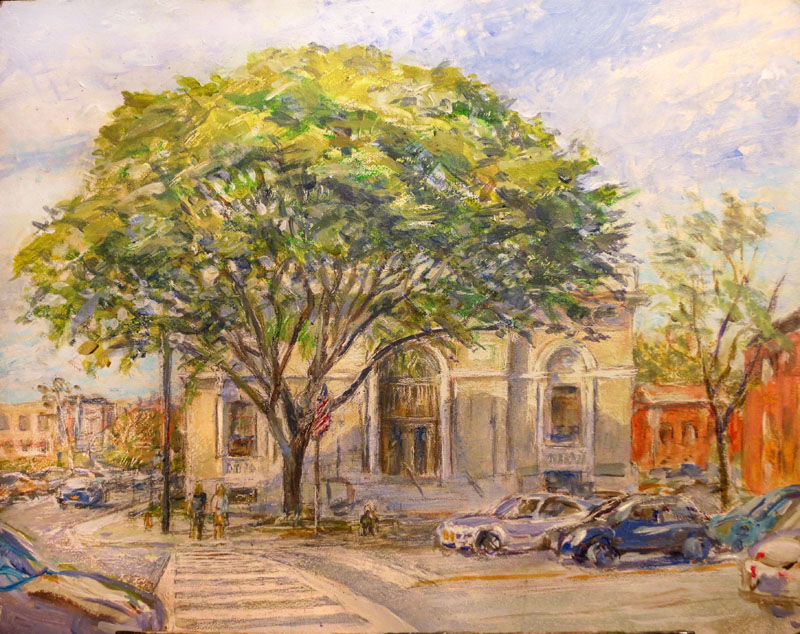 I’ll explain here a bit of the process of creating the painting and the experience of standing on the main intersection in town, talking to people about both the painting and my current exhibition at the Spring Street Gallery that calls attention to the changing treescape of the city. That exhibition of 35 years of painting ends Oct 29th and will be followed by TREEaction: Art, Activism and Saratoga’s Changing Treescapes, which will include some works from the current exhibition.

Here is a photo of the scene, a bit after the shadow on the building had lowered. The front only stayed lit for about an hour, so I worked on that first after laying in the structure.

I laid out the basic structure on a gessoed panel, eliminating most of the street so that the composition closed in on the tree. 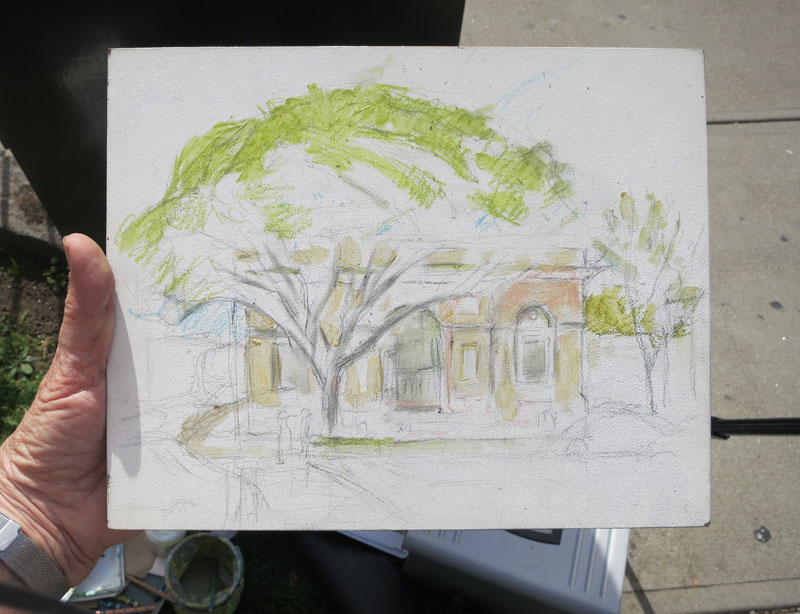 As with other times that  I have been working on treesscapes related to the exhibition, I was intrigued by how my presence on the street, making art, affected how people observed the actual scene. Most assumed I was painting the building, not the way that the tree arched over the space and added so much to the whole scene. They took time to look at it and with my suggestions, looked at the way its shape magnified the curves of the architecture. And then looked up and down the street at other trees. Most had never even thought about what the trees contributed to the space. So a nice combination of Art and Activism 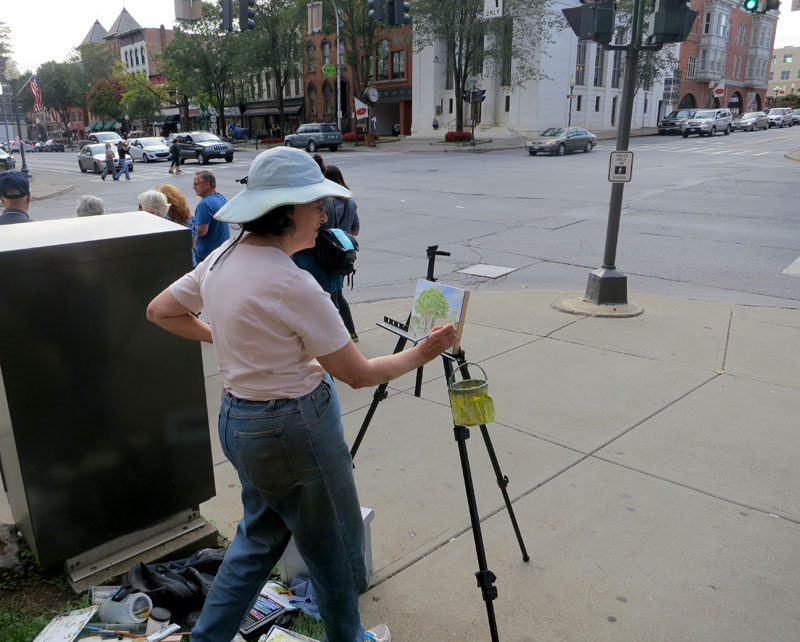 At the end of four hours, most was laid out, but I wanted to establish the shadow on the building, figure out better cars and distance, crisp up the  shapes and improve the sense of light with darkening the shadows and making the tree more interesting and volumetric. 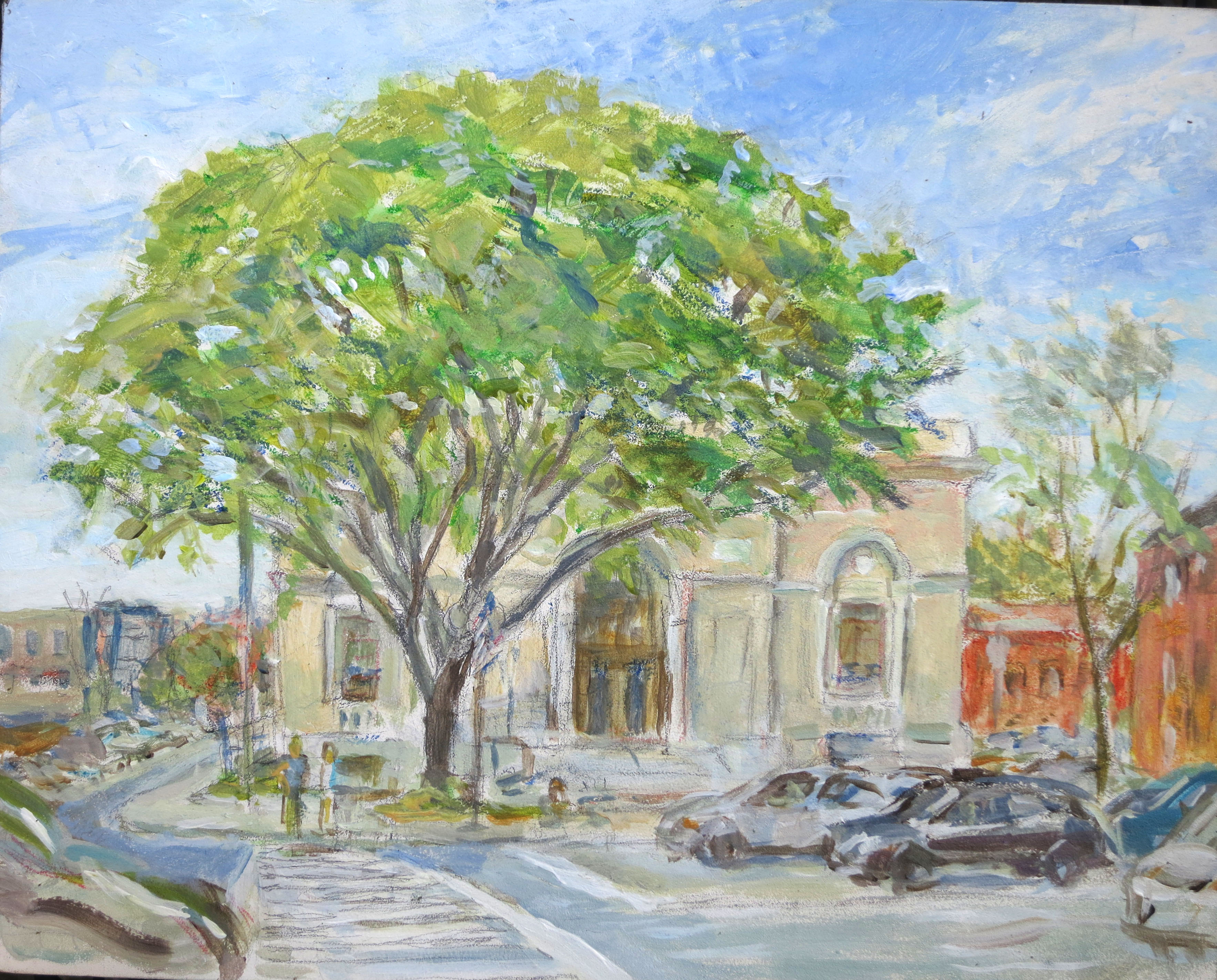 And then after working in the studio – : 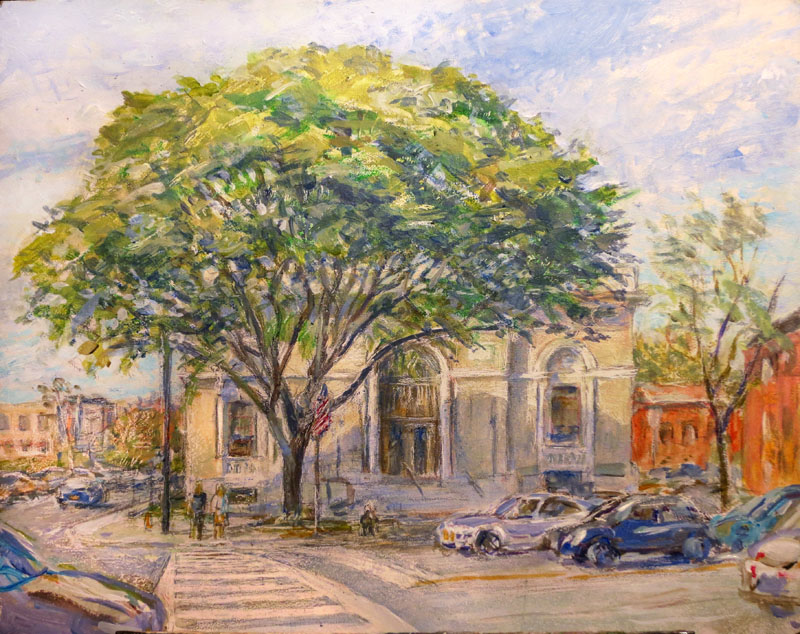 I’ll look at it in another painting session to consider what else needs to be done (or undone).

And then think about what other “intersections” of the tree and post office I would like to paint, draw or create hybrid images of.  I also like the way the tree fills the space as I look from my car, driving down church street. Or the winter version with the limbs spreading out like the structural elements of a fan. Or combine both ideas. The possibilities are endless. 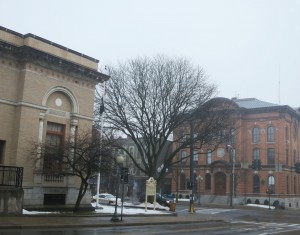 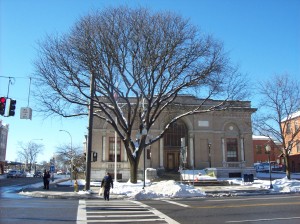