Tomorrow, Oct 29th, is the last day of  the exhibition “What the Trees Say,” and another exhibition, “TREEaction,” will start forming in Spring Street Gallery, with a reception on Nov. 7th.  It is a celebration of Saratoga’s trees and a meditation on the power of activism that Saratoga’s trees have inspired.

The now-ending exhibition of my work has called attention to the trees and the similar role they play in art and in the fabric of the city.  If we take them for granted, we won’t be inspired to advocate for the Urban Forest and follow through on the Master Plan.

With a shifting of artwork, it’s a good time to focus on the current change of seasons and how I’ve been inspired by it over the years. In my early work I  welcomed the vibrant color after a summer of greens  As with many trees in my works from the late 70’s, a number of the maples seen from my studio have disappeared. Click on the titles to see more about each piece (those with numbers have been in the exhibition). 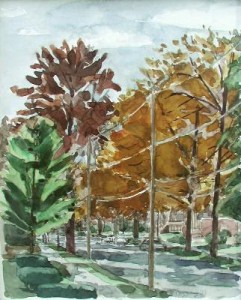 For some, I emphasized the contrast between fleeting color and ever-green 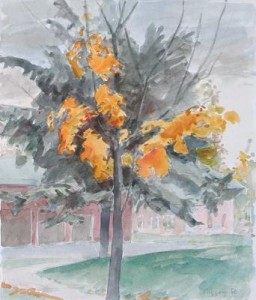 In the way that I love that the first dots of spring color enliven the linear patterns of branches, I also celebrate the way that the last leaves cling and dance after most have fallen. In this watercolor, the simple strokes of paint  barely hold on to the space. 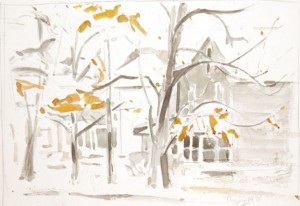 That time of late fall, with its pairing of color with the re-emerging  linear rhythms, has inspired several that make use of the lines of architecture that are activated by the juxtaposition with the trees.

And in the park I found the juxtaposition of the tree in its final flourish of color with the memorial for those soldiers who have fallen, each speaking to the passage of time. 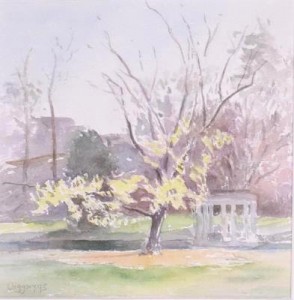 While this painting is mainly a celebration of color, I also had fun with using a raking light in a painting about raking and trying to control the color that has fallen 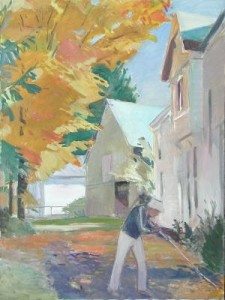 One fall, the color in my neighbor’s tree was so amazing that I climbed out on the flat roof to paint two studies of the light from the contrast of the bright orange with the dark limbs. In the first one I included the roof, and then abandoned the reference to free up the visual energy. 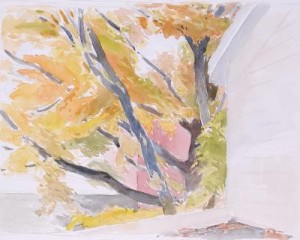 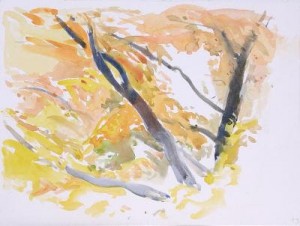 As a last image, I’ll include a small study of the elm at the back of the Algonquin Parking lot. When years ago I painted it from far away, I thought it was a maple, since it was yellow and it was on Maple Avenue. Most of the beautiful maples were removed by the city years ago when work was done on the parking lots. Now that I know this is an elm, I see it as one of the survivors from the era of so many elms lining Broadway and around town. 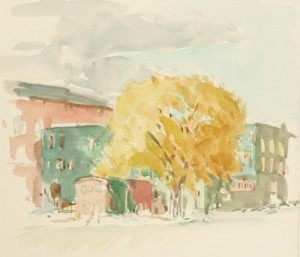 As with all trees, eventually they will be gone, and for this elm survivor, I will again have been an inadvertent historian of lost trees in the water color above and the more recent works, Fireworks Elm and Elm Ascent. I hope this elm remains even when the parking lot gets re-developed.  The work of the Urban Forestry Project will continue to advocate for the care of Saratoga’s trees and appropriate plantings. Meanwhile I’ll keep working on the paintings and hybrid works and paying attention to what the trees say.. 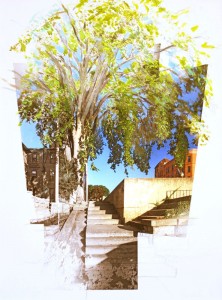 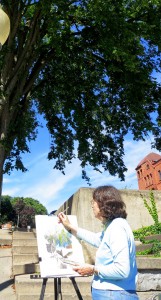