As the exhibition of Saratoga streetscapes nears the time of installation (opening Sept 12 at Spring Street Gallery) I have been giving further thought to my musings in my first posting, in which I started thinking about what has changed and what has stayed the same in my work as well as which trees are no longer in the landscape.

Nearly 25 of the small works in the exhibition are from my first few years in Saratoga, 1977-1982, when my house and studio were on the corner of Lincoln Avenue and Jackson Street. During those years, as now, a wide range of subject matter interested me (see my online inventory), but in those streetscapes can be seen the visual themes that interested me in all my work — the way that light defined a space and brought sometimes disparate things into relationship — and usually inspired by the elements of daily living rather than iconic scenes.

I’ll focus here on how the landscape has changed in my old neighborhood since the early 80’s. Many of the trees are gone. New trees have been planted. Change happens – and I make no judgement here on whether the change is a positive change. What matters is that the city’s new Tree Master Plan will support the use of appropriate, non-invasive trees as replacements are inevitably made.  (The titles link to other information about the pieces. All photos are 2013.) 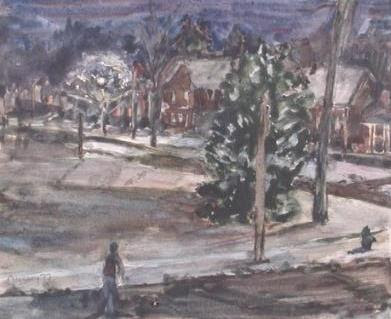 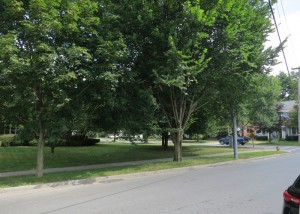 The corner of Nelson and Lincoln has been filled with deciduous trees – no longer an open yard with a single evergreen standing sentinal at the corner. 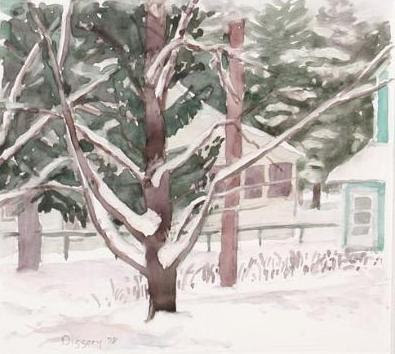 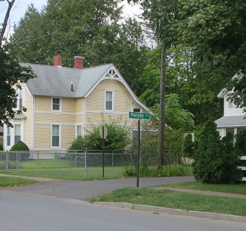 Many of the trees  are gone. The one in the foreground of the painting was taken down while I lived there. The house is clearly visible (I had liked how it peaked out from the branches). The alley looks wider and the fencing has changed. But the telephone pole remains. 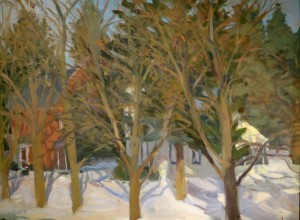 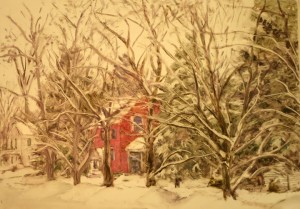 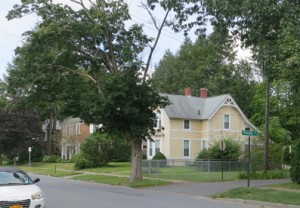 One of the maples remains, not in great health, but adding to the canopy and the street rhythms.

Just shifting my view to the left from the intersection, I used the motif of trees seen against Presidential Arms. One maple  by the street has grown substantially and has had its street-side branches trimmed. (this had been painted from an upstairs window) 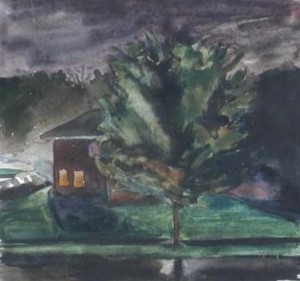 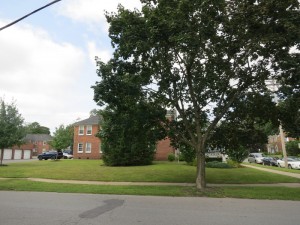 The parking lot trees have been replaced   1979   Two Trees 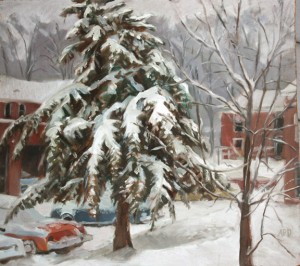 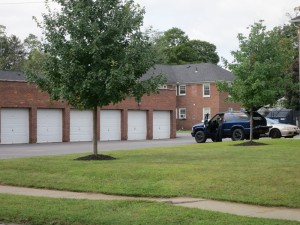 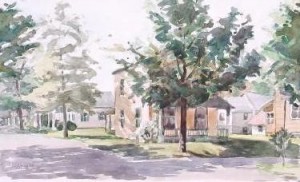 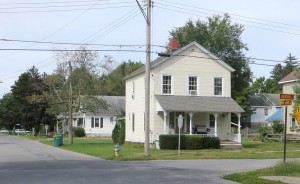 If I were to return to the neighborhood to paint, I would find different elements to choose from. I would miss the variety that the evergreens introduced – both in shape and color. Another factor that might affect my choices is that I no longer would be reacting to a very  familiar scene transformed by a change of season.or time of day. That happens more in my new neighborhood on Circular Street.

I’ll write more on the artistic changes in another posting.