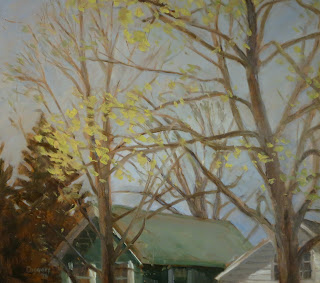 As the puffs of bright yellow green appear on the darker branches, new visual rhythms are available to paint.   In 1978 I painted “Spring Tops” (16×18″, oil on masonite, pictured above) as one of many paintings from my neighborhood near the intersection of Lincoln Avenue and East Avenue. The green spots of color are only beginning to appear as scattered notes that in some places stand out against dark colors but barely contrast in value with the sky.  I remember being intrigued by the variety of relationships and pushing the similarity of value to get a resonance of color. And even though by the the second day the leaves began to take over the sky, I left them in fewer numbers.

Today, inspired by the first lunch of the season on my patio, I have decided to paint from home on a work tentatively titled :  “Needing Painting”  It is unusual to start with a title – that usually takes scouring old lists of unused evocative titles, looking at poems, talking with my family (which was the source of this one).  Not only do I need to do some painting, but both houses need to be painted – the white one with bare spots showing and the blue one only partially painted after a fall project was abandoned with the onset of cold weather. 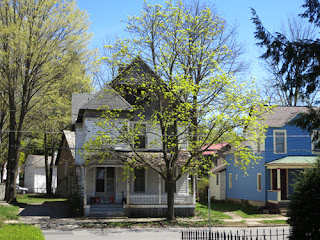 And then there was the echo of the green with a lunch time pear. It could become part of the artwork in some way, although the scale change would be a challenge. 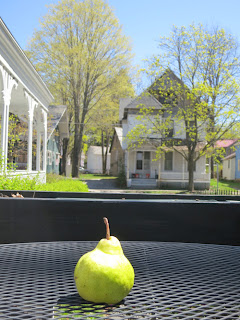 The relationship of the tree’s geometry to that of the house had caught my interest a few days ago – but I hadn’t gotten past a sketching of the main lines in my mind.  Here is a new sketch showing the triangle of the roof set off with the inverted triangle of the bottom limbs. 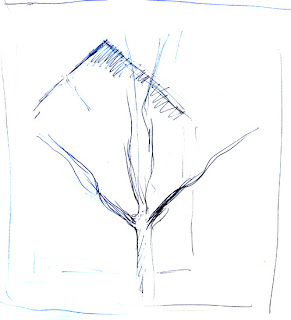 So now to start making the art.  I’ll post more later. I have to figure out the balance of posting and painting. The light has started shifting to the front of the buildings, so I’ll have to decide if that much more white improves the total image or if I prefer the darker house in the morning shade.